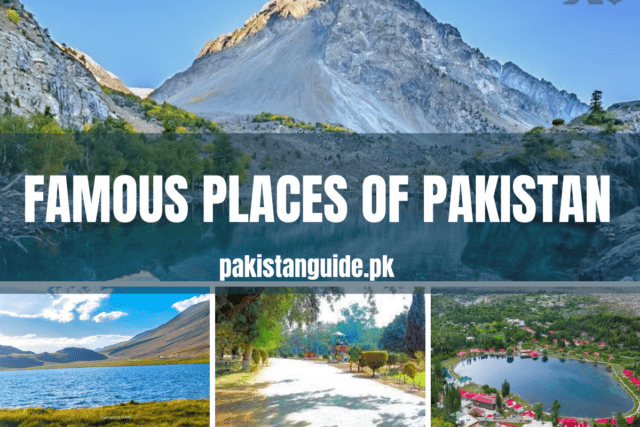 Whenever we think of the Famous places of Pakistan, first of all, what comes to our mind is terrorism, extremism, sectarianism, load shedding as well as inflation. Despite all these issues, we love our country.

Pakistan is full of breathtaking locations making you fall in love with this country. If you are a tourist traveling lover, then you must compile a list of some of the beautiful and Famous places of Pakistan to visit this year. Here we are going to discuss the top ones from our list which you must visit as all these places are remarkable and unforgettable:

Naltar is Famous places of Pakistan for its colorful lakes. It is situated at a drive of about 2.5 hours from Gilgit. You’ll find the cultivation of the world’s tastiest potatoes here. Covered with pine trees, the valley doesn’t seem to be a part of this world.

Hence, if you really want to experience paradise, you should visit Naltar at least once in your life. We guarantee this place will make you fall in love with it.

Skardu is the central valley of Gilgit-Baltistan located in the extreme north of Pakistan. It is the epitome of beauty and wilderness. On the Karakoram Highway, cover a narrow road turning towards Skardu. During the seven-hour journey, you’ll enjoy several streams, springs, and the hospitality of the people.

After crossing the old wooden bridge, one reaches Shangrila, a paradise on earth. It is one of the Famous places of Pakistan‘ in Skardu, it’s about 25 minutes away by drive. Moreover, the restaurant in Shangrila rest house is also a highlight of this place.

Deosai is located on the boundary of the Karakoram as well as the western Himalayas. The location is less than 4000 meters above sea level. Deosai Plains remain covered with snow for around 8 months. However, the rest of the year, it hosts a range of flowers of all hues and colors. The surprising thing is, not a single tree in this plateau is spread over 3000 sq. km.

Along with this, Sheosar lake is also part of this. There is a great need to know that, the lake is one of the highest lakes in the world. You must enjoy the deep blue water, with snow-covered mountains in the backdrop. The greenery with wildflowers in the foreground offers a majestic view in summers.

Lying amidst the landscapes of the Cholistan Desert, Bahawalpur is the heart. Once it was a part of the Rajputana states stretching the region of Rajasthan. There is a great need to know that Nawabs ruled Bahawalpur until 1955. Most of the things were built during their rule. Some of them are still the most beautiful landmarks of Bahawalpur even today. The most famous monument is the Noor Mahal, Derawar Fort, Farid Gate, as well as the royal tombs.

Moreover, this city also serves as a gateway to the Lal Suhanra National Park. The park is a UNESCO Biosphere Reserve. It’s one of the few places on Earth where you can find forest, desert, as well as wetland ecosystems in a small territory.

When any beloved pet dies, people usually keep its memory alive and maybe a few objects to remember it by. In 1606, Mughal Emperor Jahangir’s pet deer died, he built a minaret to commemorate it. The Hiran Minar is in Sheikhupura. The place briefly enjoyed the status of hunting ground in the early 1600s. The place shows love and respect for the animals. If you are on your vacation, add this place to your bucket list to enjoy the history.

The majestic Badshahi Mosque in Lahore- the heart of Punjab is one of the most stunning sacred sites for Muslims. The mosque was built in 1673. It was the world’s largest mosque for over 300 years until the Faisal Mosque was completed. The huge courtyard is stretching over an area of 26,000 square meters, remains the biggest in the world. The place hosts up to 95,000 worshippers.

The external walls of the mosque are clad with red sandstone panels, sculptured with beautiful, lentiform motifs and embellishments. The mosque has four minarets and three domes, coated with white marble. Travelers from all over the world welcomed into the mosque through a grand entrance gate that isn’t any less breathtaking.

Muree- one of the most beautiful hill stations. It was created in the 1850s as a sanatorium for British troops. Now, today it is the most beautiful and attractive mountain resort town in the region. If you are traveling to Pakistan, never miss Murree. The winters are very cold here. However, the landscapes are breathtaking. The summer temperatures are pleasant, making it an ideal getaway destination throughout the year.

The construction of the Faisal Mosque began in 1976 and was completed ten years later. By then, criticism had crumbled in front of the imposing, building that dominates Islamabad. However, the mosque is named after Faisal bin Abdul-Aziz- the Saudi king. He suggested the idea of a national Pakistani mosque and financed its construction.

The 5,000-square-meter prayer hall of the mosque is an eight-sided, concrete structure, with a capacity for 100,000 worshippers. Along with this, the mosque is surrounding four 88-meter-high minarets.

Ranikot is the largest fort in the world along with a circumference of 26 km. However, this place has not been enough to convince the governmental authorities in order to develop it as a major tourist attraction.

You can easily access the fort from Karachi through the National Highway. After departing from Karachi, just head to Dadu. The road is in excellent condition and it’s just an hour-long journey to San. A little away from the town, there is a rusty board announcing Ranikot is 30 km away. However, the road is in pathetic condition, it’ll take around 40 to 50 minutes to reach the destination.

It was all about some of the beautiful and famous places in Pakistan. If you are local or outside, you must add all these places to your bucket list in order to have an amazing experience of hills, lakes, history, and beautiful landmarks.

Trango Tower in Gilgit Baltistan is the most spectacular Varticla Alpine Climb in the...